Coming on the heels of last month’s vinyl release of his enigmatic Burnt Weeny Sandwich, Frank Zappa’s stylistically diverse and subversive 1970 album Chunga’s Revenge will be the next classic Zappa album to be reissued on vinyl as part of the Zappa Family Trust and UMe’s ongoing initiative to restore the iconoclast’s iconic catalog. The record will receive a 180-gram audiophile repressing on black vinyl on July 20 via Zappa Records/UMe. Supervised by the ZFT, the record was specially mastered for this release by Bernie Grundman with all analog production and cut directly from the original 1970 analog master tapes. Unavailable on vinyl for more than three decades, the last pressing was in 1986 for Zappa’s rare Old Masters Box Two on his own Barking Pumpkin Records. The LP, which will be pressed at Pallas in Germany, will include meticulously reproduced original artwork. A limited edition color vinyl version is also in the works to be released on the same date. Pre-order Chunga’s Revenge on 180-gram black vinyl here: https://UMe.lnk.to/ZappaChunga

Chunga’s Revenge was one of three albums that the highly prolific composer released in 1970, following Burnt Weeny Sandwich and Weasels Ripped My Flesh. Although released under Frank Zappa’s own name, the album is most notable for introducing a new Mothers lineup that included the Phlorescent Leech (Flo) & Eddie, the pseudonyms for former Turtles members Howard Kaylan and Mark Volman who performed under the aliases due to contractual restrictions. The reconfigured lineup included bassist Jeff Simmons, keyboardist and trombonist George Duke, drummer Aynsley Dunbar and multi-instrumentalist Ian Underwood. Derived from various sessions during that year, the record ebbs and flows between instrumental and vocal tracks and as noted by Zappa on the original sleeve, “All the vocals in this album are a preview of the story from 200 Motels,” his acclaimed film and soundtrack released the following year.

From the funky guitar workout of opener “Transylvania Boogie” to the bluesy send-up “Road Ladies” to the jazzy “Twenty Small Cigars,” a standout recorded during the Hot Rats sessions, Chunga’s Revenge is an eclectic affair that sees the ever-restless musician and his adroit band traipse through a variety of genres with aplomb. The album’s centerpiece, closing side A, is “The Nancy & Mary Music,” an almost 10-minute long three-part improvisational suite recorded live that sees each Mother flexing their musical muscles for a freewheeling freak-out of epic proportions. Side B opens with the hard rocker “Tell Me You Love Me” which gives way to the warped pop of “Would You Go All The Way” and the jammy title track, propelled by Ian Underwood’s wah-wah pedal sax solo. The album closes with two songs that showcase the vocal talents of Flo & Eddie: “Rudy Wants To Buy Yez a Drink,” Zappa’s jaunty, tropical-tinged response to his experiences with the Musician’s Union, and “Sharleena,” a soulful ballad that see Zappa putting his unique spin on doo-wop and R&B. 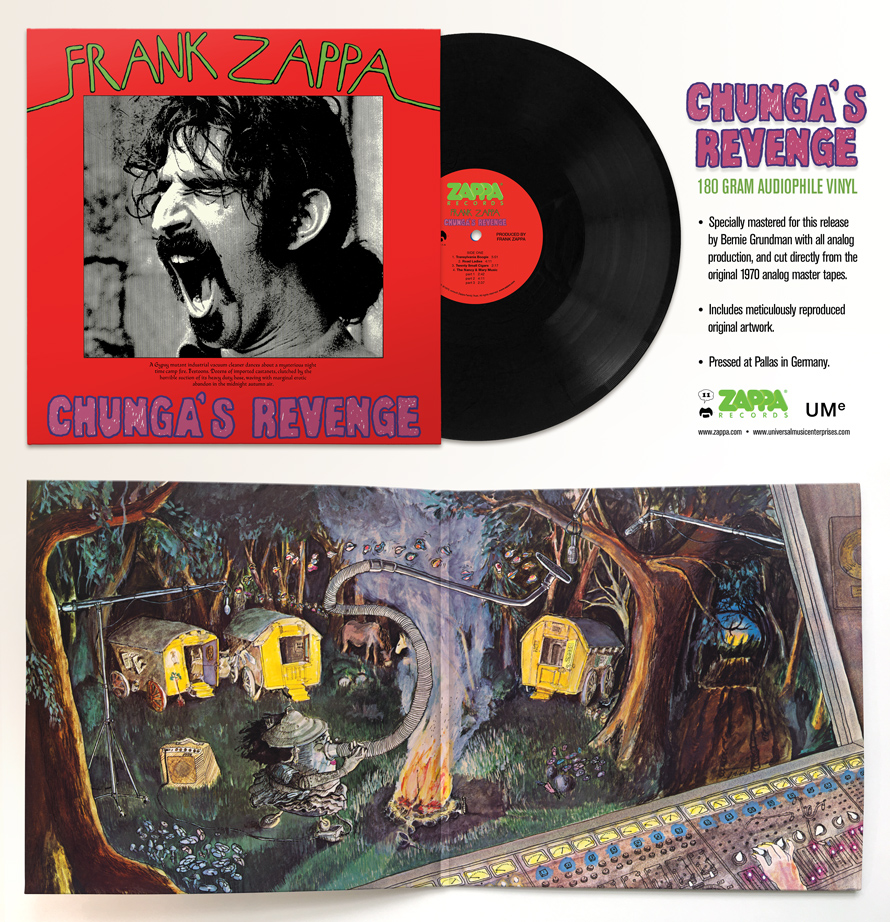