Original Master Mix, Newly Remastered And Available For The First Time Since Its Debut

Available On March 29 Via Zappa Records/UMe

Los Angeles – January 24, 2019 – In 1976, Frank Zappa played four historic sold-out concerts at The Palladium in New York City the week between Christmas and New Year’s. These thrilling shows – described by band member Ruth Underwood as “theatrical, outrageous and raucously funny, but also filled with startling and gorgeous music, dating from Frank’s 1960s output to literally the moment the curtain went up”— served as the source material for the live double album Zappa In New York which was constructed from the best-played performances with overdubs later recorded in the studio. Originally slated for release in 1977, the album was delayed for a year due to record label censorship issues, mostly over the controversial song “Punky’s Whips,” and finally released in 1978. One of Zappa’s most beloved collections of songs, the now classic album included a sensational live version of “Sofa” alongside nine new compositions, including the complex percussion-based piece “The Black Page,” which has become infamous in the drum community as the ultimate challenge, the Devilish comedic sendup “Titties & Beer,” and the notorious aforementioned “Punky’s Whips” about Punky Meadows, the flamboyant guitarist for the band Angel.

In celebration of its eventual release in 1978, Zappa In New York will be released on March 29 via Zappa Records/UMe as a suite of expanded anniversary editions to commemorate the album’s recent 40th anniversary. Overseen by the Zappa Family Trust and produced by Ahmet Zappa and Vaultmeister Joe Travers, the expanded versions will be available as a 5CD box set, 3LP on 180-gram audiophile grade vinyl and digitally. The 5-disc collection, which will be housed in a limited-edition metal tin shaped like a NYC street manhole cover and includes a replica ticket from one of the shows, consists of the main album in its original mix, newly remastered by Bob Ludwig in 2018 and available for the first time since its debut. The four additional discs are loaded with relevant Vault nuggets and more than three hours of unreleased live performances from the NYC Palladium concerts, representing every composition played during the concerts and the best alternate performances of every tune Zappa picked for the original album, all newly mixed in 2018. To achieve the highest-level sound quality, the audio team went back to the original two-inch 24-track multi-track master tapes and transferred every reel at 96kHz 24-bit wavs.

The Zappa In New York 40th anniversary editions are available for pre-order now and all digital pre-orders will receive an instant grat download of the unreleased rarity “The Purple Lagoon/Any Kind of Pain.” Recorded on the first night of the four-night stand, the track features Zappa performing the chorus of the song “Any Kind of Pain” in the middle of “The Purple Lagoon.” What makes this so significant is that nobody knew this existed or that Zappa had the idea for this song more than a decade before it was released in 1988 on the live album Broadway The Hard Way until the Zappa Family Trust archived the tapes and made the fascinating discovery. More proof that Zappa was creating at an unmatched pace and always thinking years ahead. Pre-order Zappa In New York 40th anniversary edition now: https://ume.lnk.to/ZappaInNewYork40

“We are excited to bring you this new Deluxe version of Zappa in New York: an opportunity to re-examine and celebrate the source material of a great album while exploring the events of Frank’s life in late December 1976, Collections like these really show of the work ethic of a musical genius,” exclaims the Zappa Family Trust in the album notes.

Zappa in New York includes expanded packaging which features previously unseen live photos by Gail Zappa alongside extensive liner notes by band members Ruth Underwood and Ray White (who were part of Zappa’s band for these shows) as well as an insightful essay by Joe Travers with Australian writer Jen Jewel Brown. Underwood also contributes a solo piano version of “The Black Page” that has been newly recorded for this special edition. “‘The Black Page’ has proven to be one of Frank Zappa’s most intriguing and enduring compositions. It is performed in many kinds of venues all over the world. It is taught and studied in schools. Perhaps most exciting is that it is adaptable and lends itself to a variety of orchestrations and re-workings, as FZ himself demonstrated. I am proud that after forty years, mine is finally among them. It is my love letter to Frank and Gail,” Underwood writes in the liners.

The 3LP set, pressed at Pallas in Germany, features all-analog mastering of the original album mix, unavailable since first issued. Plus, an additional LP of select bonus content from The Vault. The digital release marks the debut of the original mix.

Zappa In New York capped off a terrific year for the ever-prolific and always-moving musician which included shows around the globe including his second Australian tour and one and only Japanese jaunt, the release of his album Zoot Allures and Grand Funk Railroad’s record Good Singin’ Good Playin, which he produced, a string of Halloween shows and a performance on “Saturday Night Live” which ended up having a profound impact on the Palladium shows. Following an on-air collaboration with SNL’s announcer Don Pardo and the show’s house band, Zappa invited them to be a part of the shows after three of the horn players so loved playing with Zappa that they asked if they could be involved. As Travers and Brown write in the illuminating liner notes: “Out of nowhere, the concept of adapting horns to the scheduled concerts became a reality. Frank was immediately swept up in the pleasure and challenge of writing and arranging parts for the existing material.”The collection showcases some of Zappa’s most masterful guitar playing and electrifying arrangements as he leads an exceptional band featuring Ray White on vocals and guitar, Terry Bozzio on drums and vocals, Eddie Jobson on keyboard, Ruth Underwood on percussion and synthesizer, Patrick O’Hearn on bass and vocals and David Samuels on timpani and vibes. Don Pardo provided “sophisticated narration” and the brass section, featuring jazz duo the Brecker Brothers with Randy Brecker on trumpet and Michael Brecker on tenor saxophone, was rounded out by the SNL players: Lou Marini on alto sax, Ronnie Cuber on baritone sax and Tom Malone on trombone. 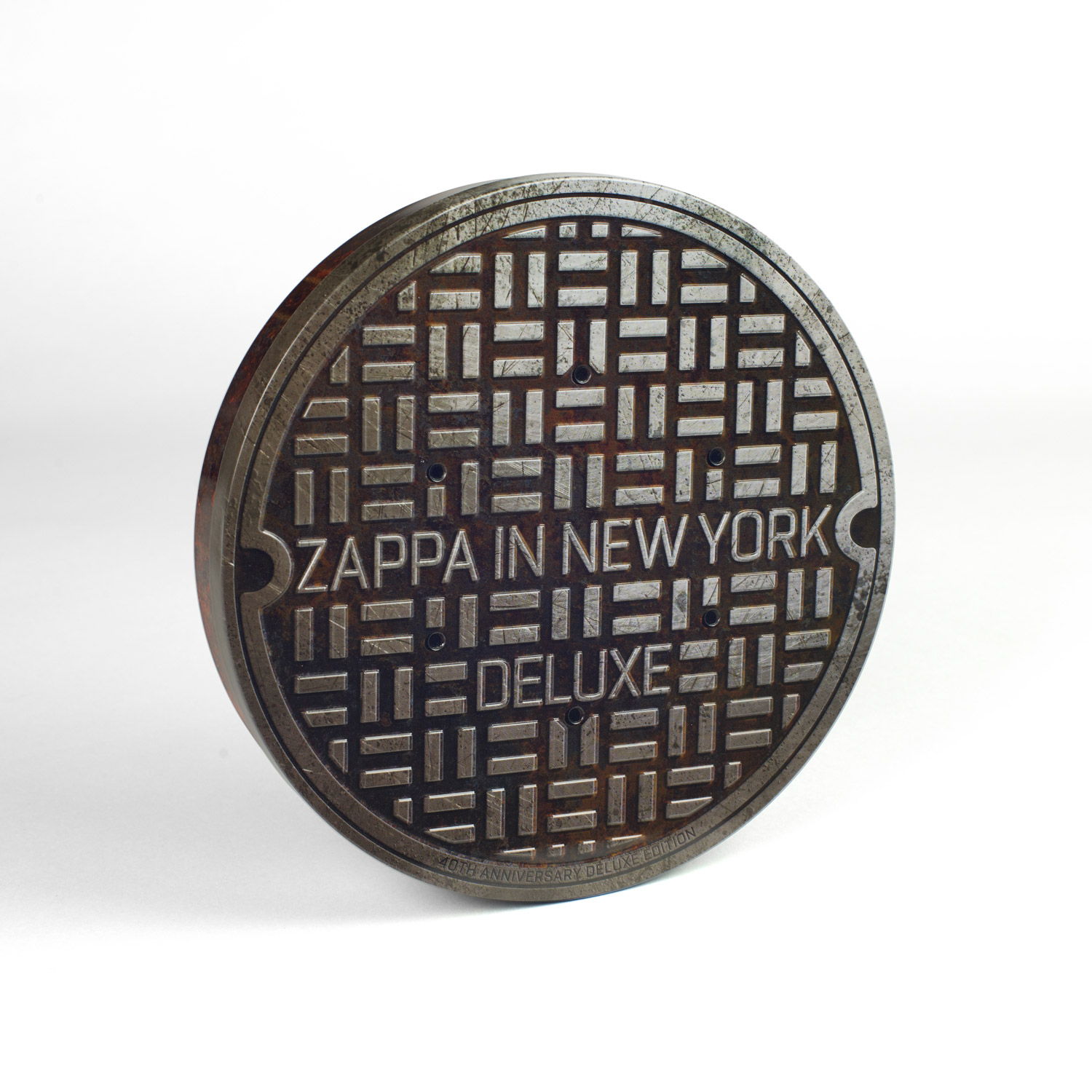 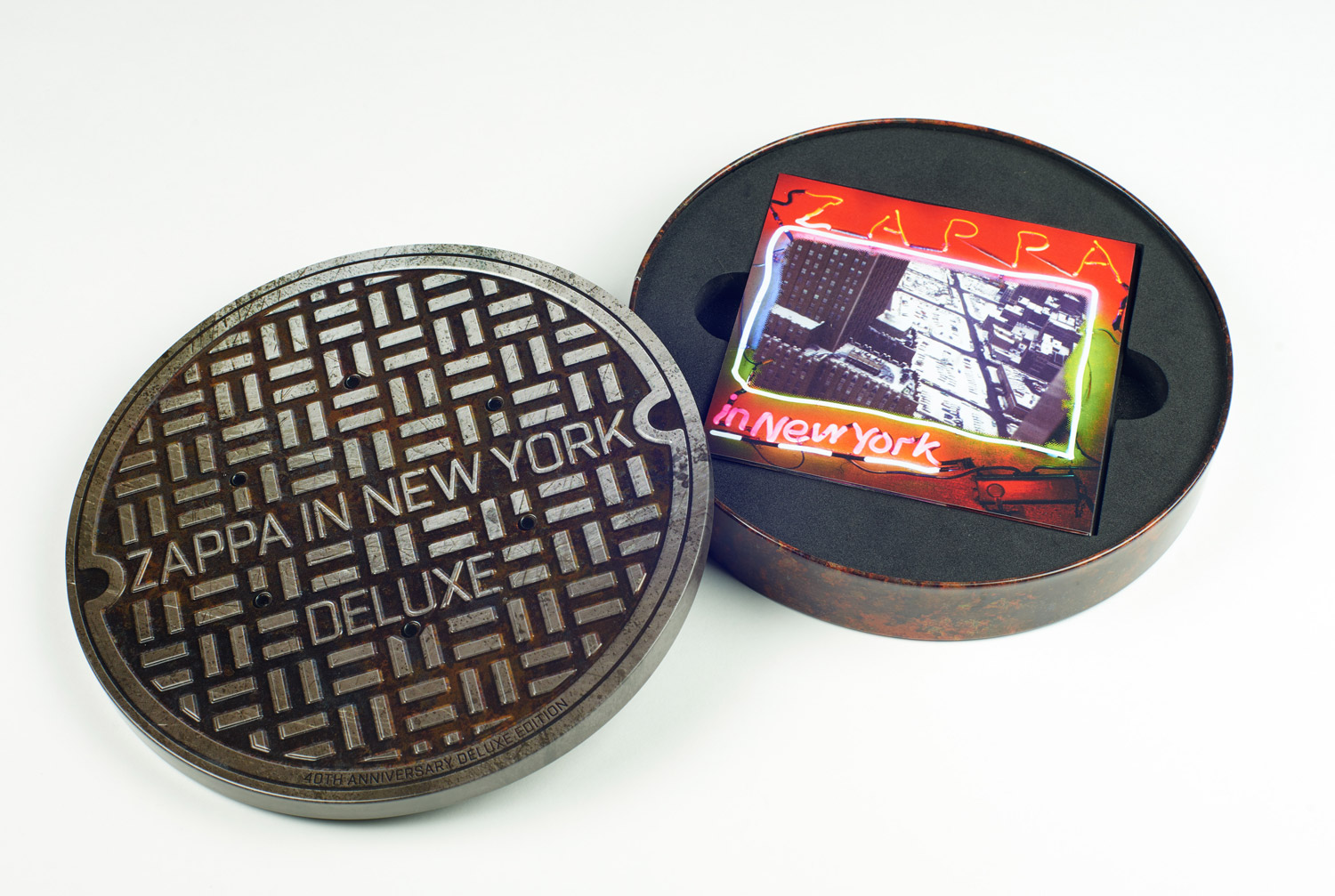 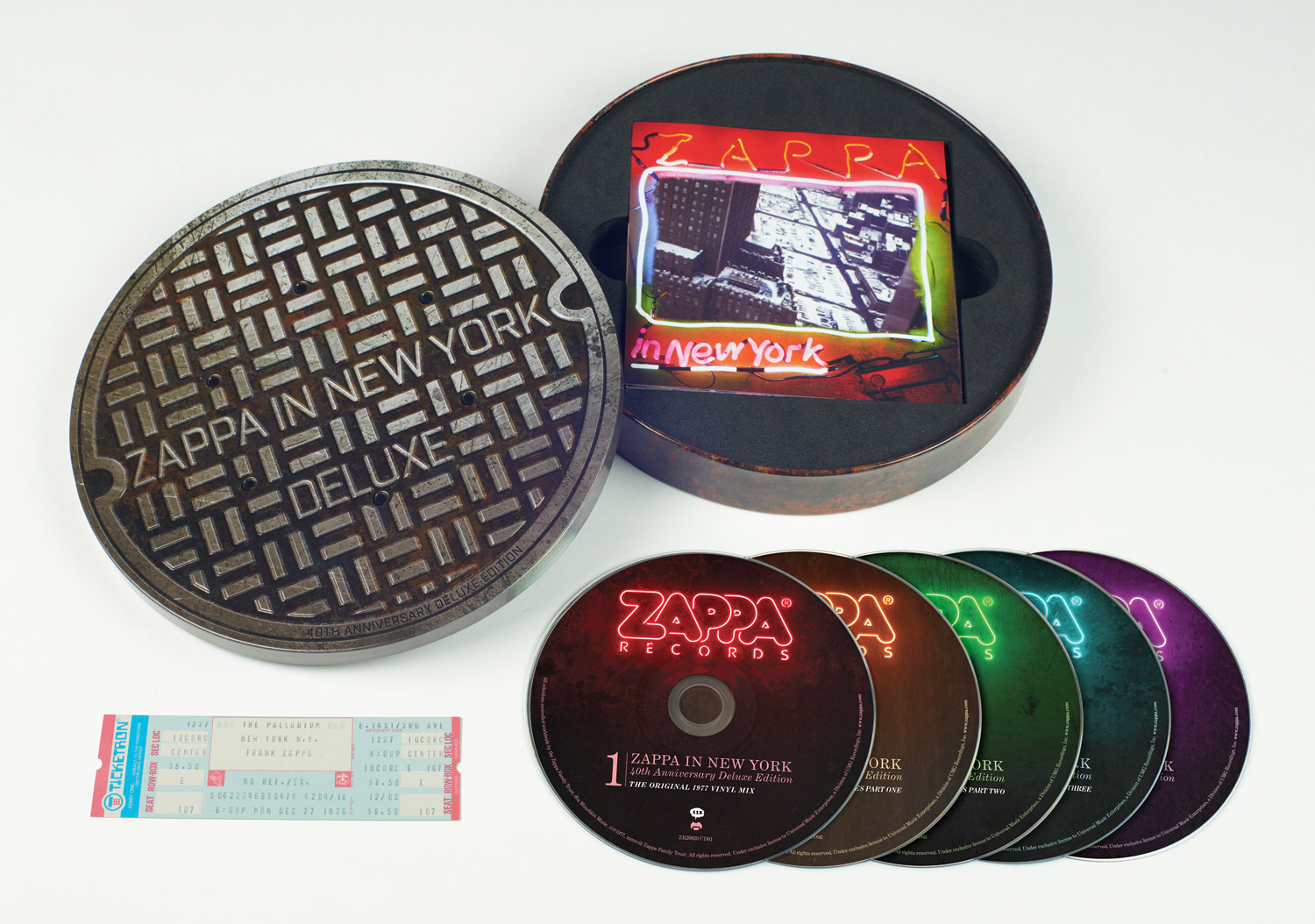 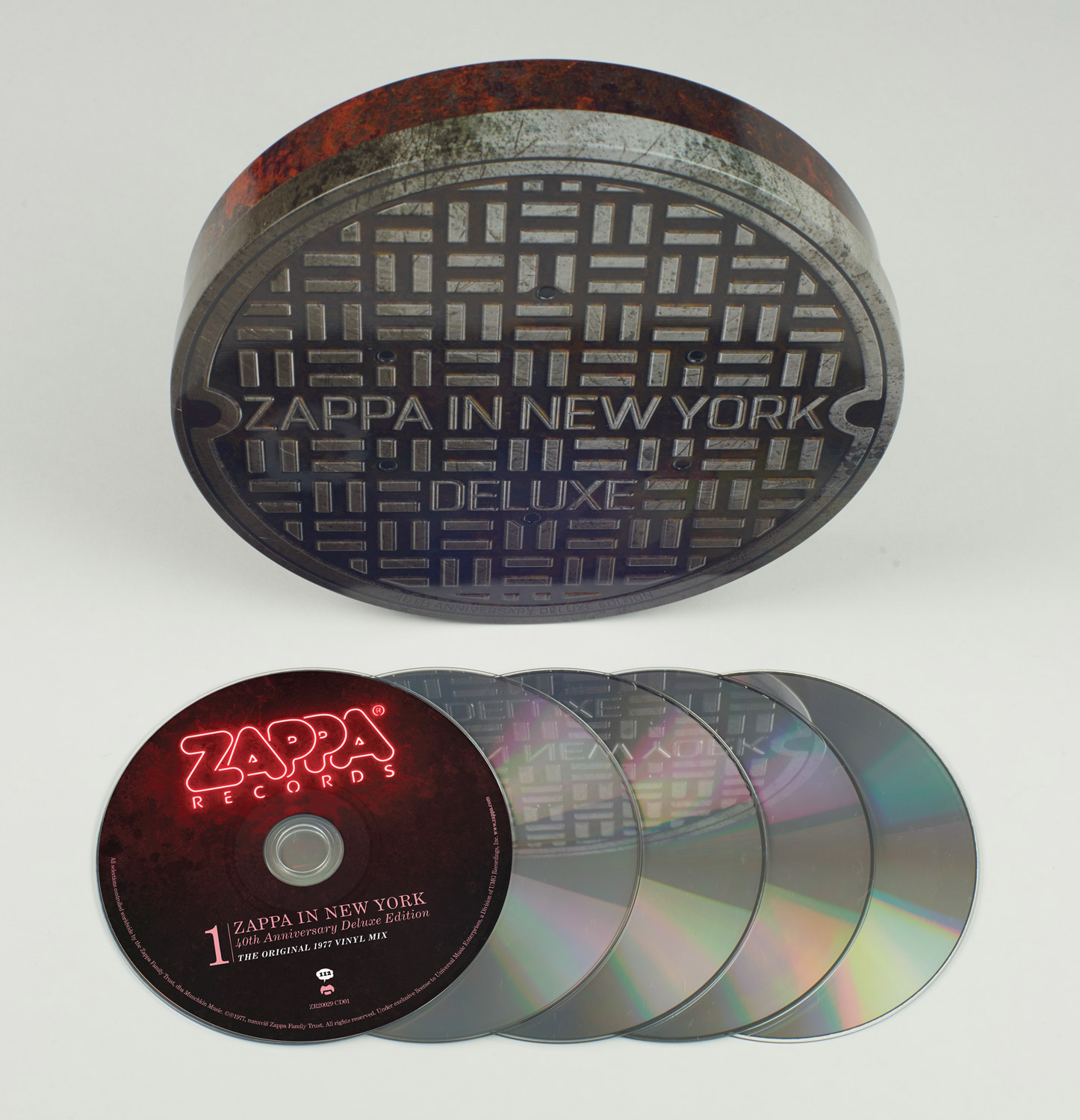 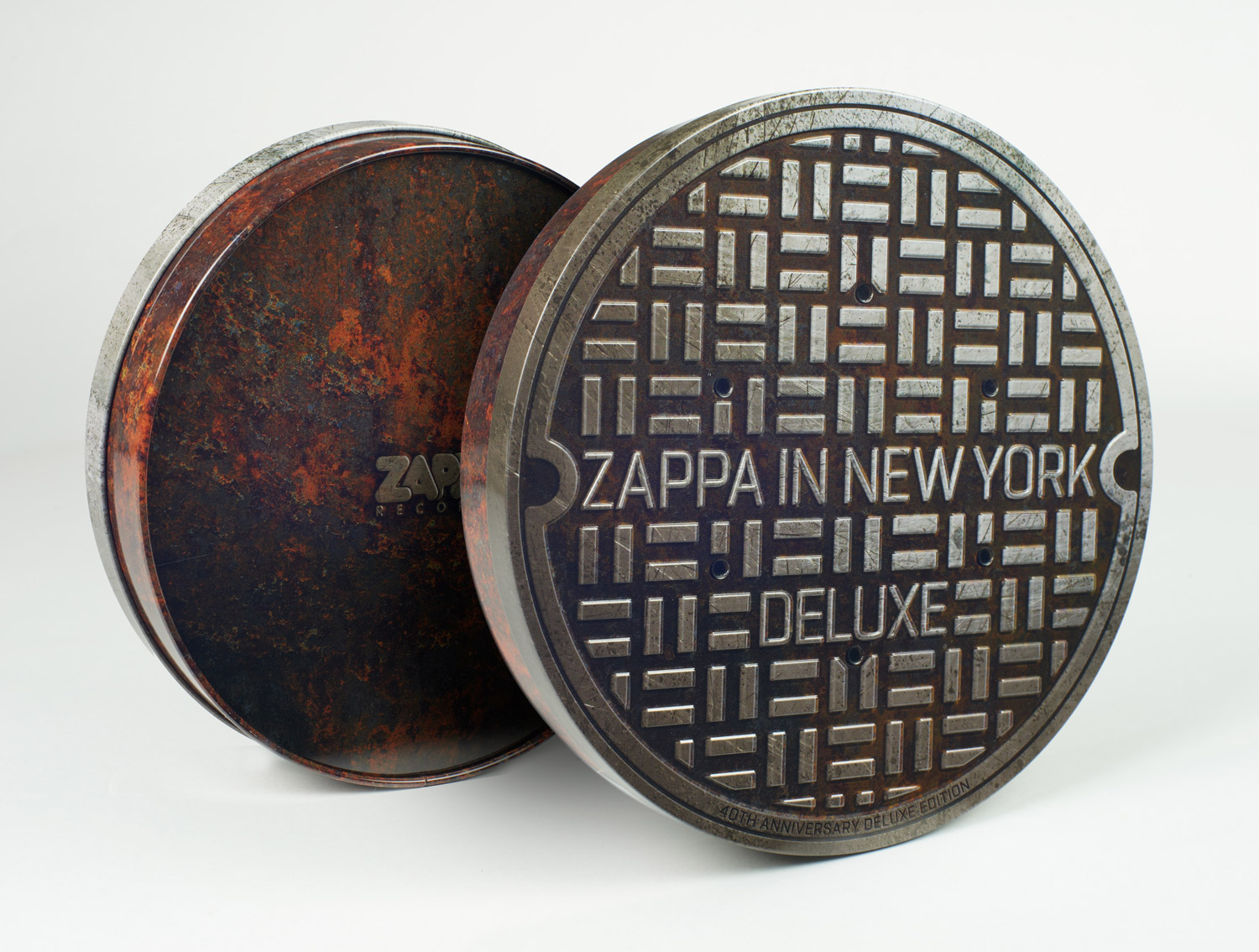 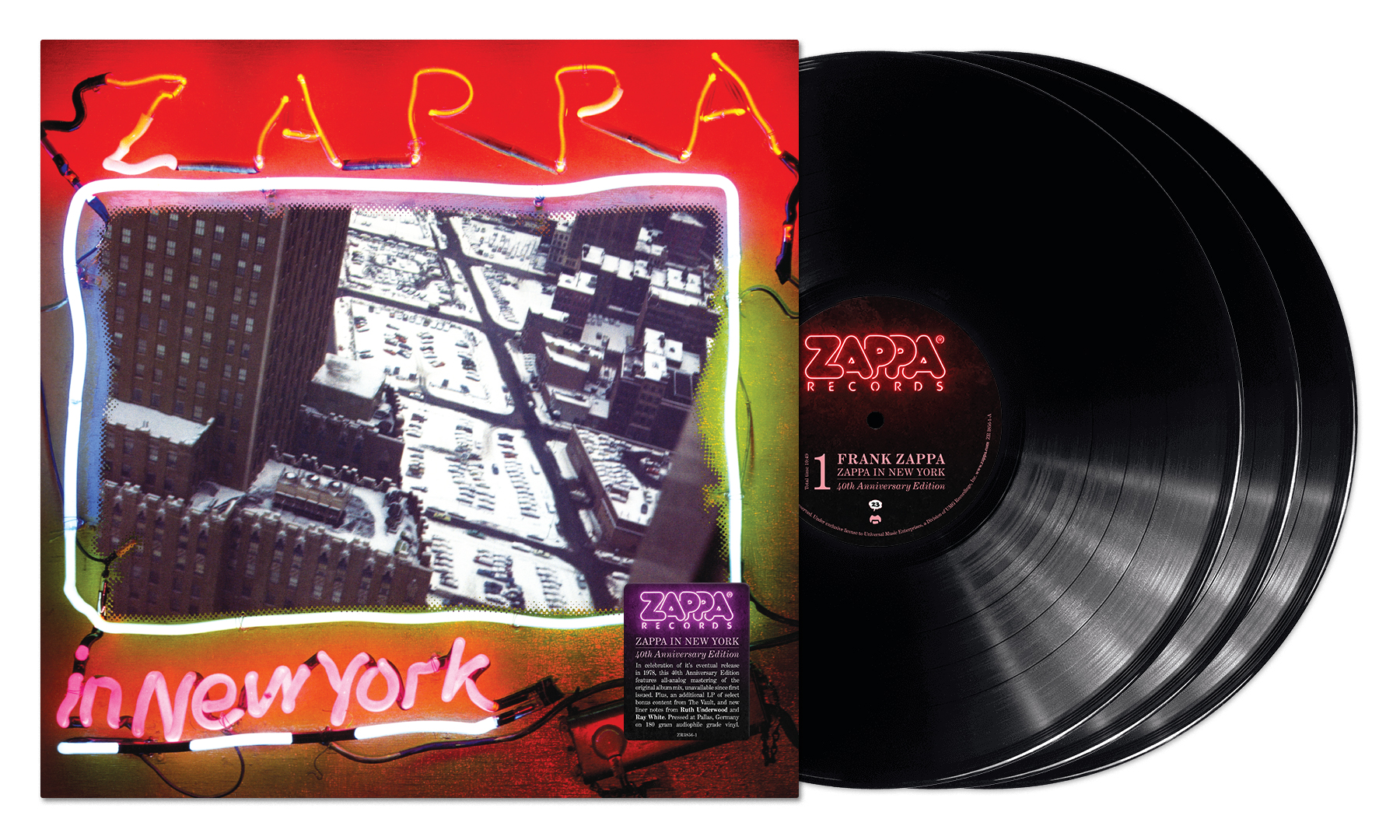